The Power of an Oath

It's easy to get into a routine.  We go to work everyday; we teach lessons; we lead faculty meetings; we email parents; we supervise carpool ... and the list goes on.  We make a million decisions every day, and many of them, we're barely aware of.  We get bogged down in the minutia and the mundane.

So how do we rise above the "grind" and stay mindful of why we do what we do?

I'm glad that every physician in this country has committed to practicing by an established collection of standards.  The field of medicine is so important that every doctor takes an oath to embrace and support a common set of values. A few years ago, I gave my teachers a copy of the Hippocratic oath at a faculty meeting.  I asked them to read it and to underline the words or phrases that resonated with them.

As it turns out, there is much in this oath that reminds educators of their own profession.  When we read the following phrases, it is hard not to apply the ideas to what we do (or what we should do) in school. 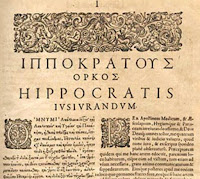 "I will not be ashamed to say 'I know not,' nor will I fail to call on my colleagues when the skill of another is needed."

"I will remember that I do not treat a fever chart or a cancerous growth, but a sick human being."


After some discussion on the relevance of the Hippocratic oath to the work of educators, I asked the teachers to write their own professional oath.  I asked teachers who felt comfortable, to post their oath outside their door.  As is normally the case, my teachers exceeded my expectations!  They articulated their professional values and commitments in some profound and poignant ways. Two of them are below: 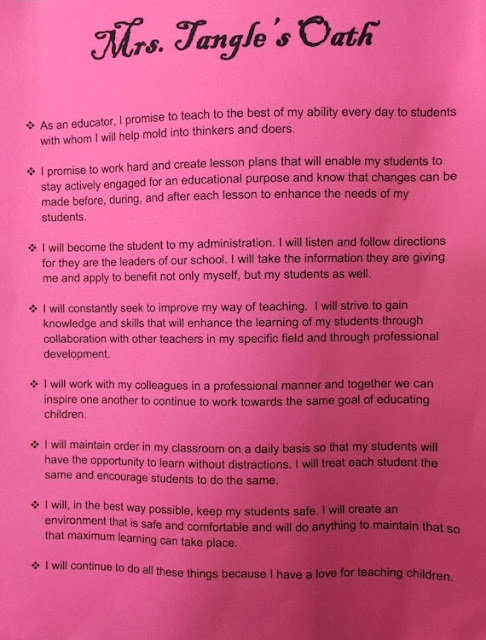 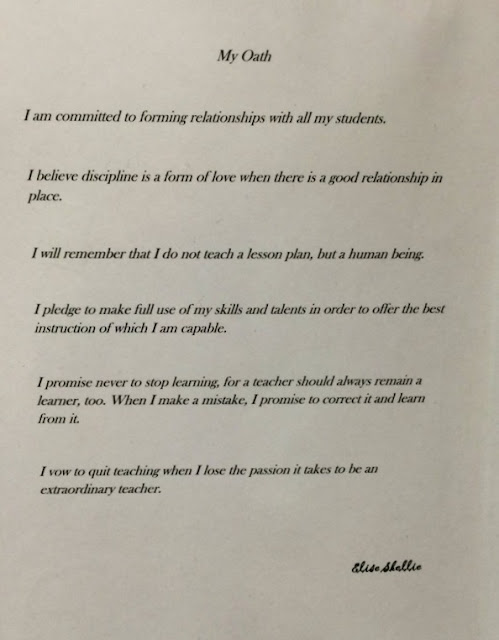 These oaths are posted outside their classroom, and I know that they have had an impact on many of the visitors in our building.  I also wanted the students, staff, and parents to know what my commitments were as the school's principal, so my oath is posted on my office door. 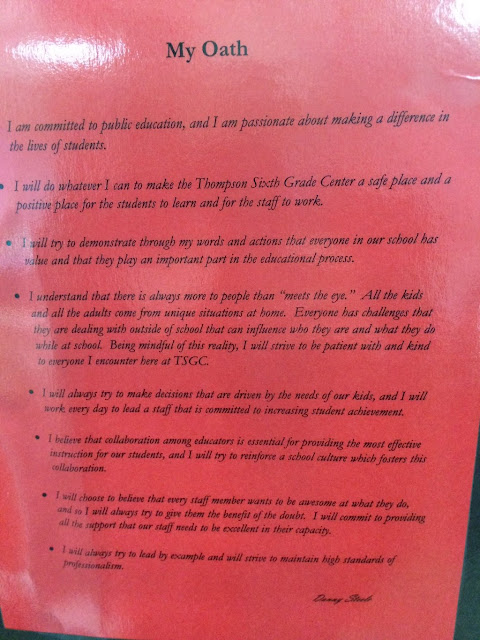 I wish I had written and posted my oath 23 years ago.  These oaths keep us connected to our core values.  They communicate to our students and our colleagues what they can expect of us.  Most importantly ... they remind us why we come to work each day.  In the near future, I'll be encouraging my teachers to post their oaths on their school website.  I cannot imagine a parent who would not love to read the values, priorities, and commitments of their child's teacher.

So what are your commitments to your students and your colleagues? How are you accountable to them?  Consider writing and posting your own professional oath. 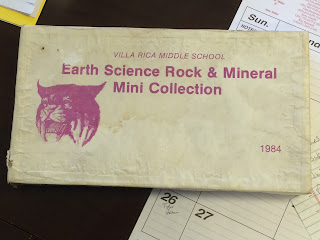 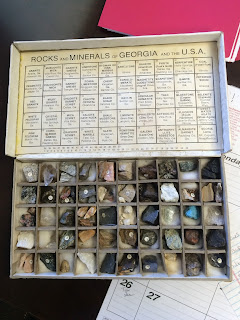 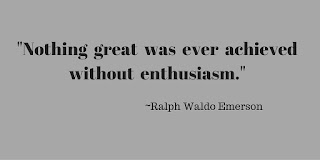 The Hug that Changed Me

Years ago, when I was a high school assistant principal, I had Eric in my office.  He had been in my office many times before, and I don’t remember why he was in my office that day.  He was what we called, a “hard” kid.  He was tough, in a gang, and saw little value in school.  I had learned that the misbehavior of students was only the symptom of other issues going on, but I often got caught up with the need to be "efficient" in my job.  At times, I felt like my office had a revolving door.  For some reason that day, I decided to try and connect with Eric.  I asked Eric a lot of questions about his life, his family, and his goals.  It was very evident that he had it rough.  As far as I could tell, he had very little going for him and had very little support.  At the end of our talk, I asked him about the last time he had a hug.  I remember very vividly his response because it crushed me.  He said, “Mr. Steele, I don’t even remember.”  I walked around my desk, and as I hugged him, I said, “Eric, I don’t know where you’ll be in ten years, or what you’ll be doing … but I want you to remember that there was a guy who cared enough about you to give you a hug.” 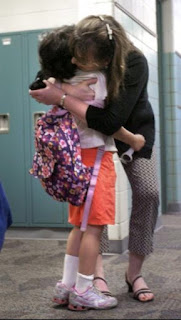 I have no idea where Eric is now ... or what he is doing.  I don’t know if he remembers that hug.
I do.
When I think of that hug, I’m reminded of why we do what we do.  I’m reminded that we see students every day who desperately need our time, our support, and indeed, our love.  Students walk our halls; they sit in our classes; and we have no idea what they’re dealing with. We get frustrated when they’re tardy, when they’re out of dress code, when they are not prepared, when they are inattentive and disengaged.  When I think of Eric, I remember that sometimes … a student might need a hug more than they need our “lesson.”
Posted by Danny Steele at 2:55 PM 17 comments: